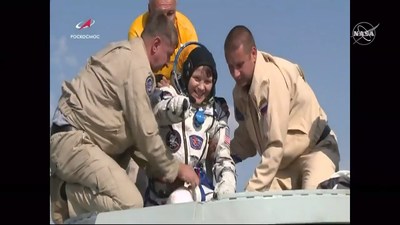 After post-landing medical checks, McClain and Saint-Jacques will return to Houston and Kononenko to Star City, Russia.

The Expedition 59 crew contributed to hundreds of experiments in biology, biotechnology, physical science and Earth science, including investigations into small devices that replicate the structure and function of human organs, editing DNA in space for the first time and recycling 3D-printed material.

McClain, a lieutenant colonel in the U.S. Army and native of Spokane, Washington, conducted two spacewalks totaling 13 hours and 8 minutes on her mission into space.

Saint-Jacques, also on his first space mission and only the sixth Canadian astronaut to perform a spacewalk, joined McClain on her second outing, which totaled 6 hours and 29 minutes. Kononenko, on his fourth mission, conducted two spacewalks totaling 13 hours and 46 minutes, bringing his career total to 32 hours and 13 minutes spread over five spacewalks.

When their Soyuz MS-11 spacecraft undocked at 7:25 p.m., Expedition 60 began aboard the station officially, with Nick Hague and Christina Koch of NASA as flight engineers, and Alexey Ovchinin of Roscosmos as the station’s commander.

The next residents to arrive at the space station – Andrew Morgan of NASA, Luca Parmitano of ESA (European Space Agency) and Alexander Skvortsov of Roscosmos – will launch aboard Soyuz MS-13 on July 20, from the Baikonur Cosmodrome in Kazakhstan and join Expedition 60 after a six-hour flight.