HOUSTON, June 21, 2019 /PRNewswire/ — Fifty years after Apollo 11 landed on the Moon in July 1969, United Airlines stands with the nation in celebration of this milestone anniversary. Beginning today and continuing throughout July, the airline, in coordination with Houston First Corporation, Space Center Houston, NASA Johnson Space Center and OTG will provide customers with a variety of opportunities to learn about and celebrate space exploration. 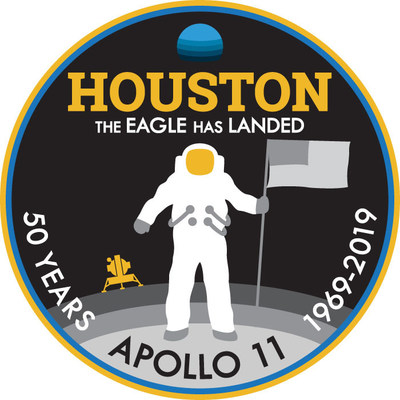 “From the moment former President John F. Kennedy made a bold commitment to further U.S. space exploration efforts at Rice University in Houston, the city became part of the national dialogue about how and when we would put a man on the moon,” said Rodney Cox, vice president for United’s Houston hub. “Not only is the Apollo 11 mission rooted in Houston’s past, it also became part of United’s history when Astronaut Neil Armstrong later served on our Board of Directors. Knowing the deep connection both United and Houston have to this historic mission, we are honored to commemorate this remarkable accomplishment with our customers.”

“We couldn’t be prouder of the role that Houston has played in some of the world’s biggest accomplishments, like the Apollo 11 mission,” says Brenda Bazan, President and CEO of Houston First, Corp. “During Space City Month, we’re excited to welcome visitors from around the globe. Between Space Center Houston and many world class museums, our city is a great place to satisfy a love for discovery and exploration.”

Every customer. Every flight. Every day.

In 2019, United is focusing more than ever on its commitment to its customers, looking at every aspect of its business to ensure that the carrier keeps customers’ best interests at the heart of its service. In addition to today’s announcement, United recently announced that luxury skincare line Sunday Riley will make products exclusively for United customers to experience in amenity kits, released a re-imagined version of the most downloaded app in the airline industry, introduced ConnectionSaver, a new tool dedicated to improving the experience for customers connecting from one United flight to the next and made DIRECTV free for every passenger on 211 aircraft, offering more than 100 channels on seat back monitors on more than 30,000 seats.

United’s shared purpose is “Connecting People. Uniting the World.” We are more focused than ever on our commitment to customers through a series of innovations and improvements designed to help build a great experience: Every customer. Every flight. Every day. Together, United Airlines and United Express operate approximately 4,900 flights a day to 355 airports across five continents. In 2018, United and United Express operated more than 1.7 million flights carrying more than 158 million customers. United is proud to have the world’s most comprehensive route network, including U.S. mainland hubs in Chicago, Denver, Houston, Los Angeles, New York/Newark, San Francisco and Washington, D.C. United operates 779 mainline aircraft and the airline’s United Express carriers operate 569 regional aircraft. United is a founding member of Star Alliance, which provides service to 193 countries via 28 member airlines. For more information, visit united.com, follow @United on Twitter and Instagram or connect on Facebook. The common stock of United’s parent, United Continental Holdings, Inc., is traded on the Nasdaq under the symbol “UAL”.

Arizona Students to Speak with NASA Astronaut Aboard Space Station