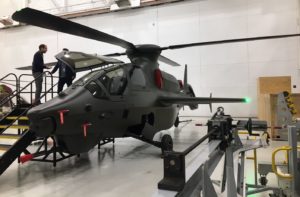 ARLINGTON, Texas — Bell Helicopter Textron [TXT] offering for the Army’s Future Attack Reconnaissance Aircraft (FARA) contest, the 360 Invictus, is intended to offer the Army an insurance policy by presenting a lower-risk path to the capabilities it hopes to acquire as a “knife fighter” light attack helicopter to replace the retired OH-58 Kiowa Warriors.

The Invictus, with its low-drag tandem cockpit design, draws from a lot of the development Bell has put into the 525 Relentless, a super-medium utility aircraft it hopes will be the first fly-by-wire rotorcraft certified for the civil market. Though Bell’s FARA program is newer than some of its competitors, such Sikorsky’s [LMT] S-97 Raider — Bell officials said the program had just three employees at this time last year and now comprises over 200 —  the company believes its reliance on systems which it already has at a high technology readiness level due to work on the 525 will provide the Army with a compelling aircraft inside of its cost and timeline objectives.

“It’s still a very advanced aircraft. But by using technologies that we already had high TRLs in, or high manufacturing readiness levels in, we are ahead on that timeline piece,” Frank Lazzara, director of advanced vertical lift systems, told Defense Daily during a press visit to the company’s Flight Research Center here.

The Invictus design meets or exceeds Army requirements in every area, according to Lazzara, due in part to the clean-sheet engineering that went into the Bell 525, including in the main and tail rotor systems. That aircraft has flown in excess of 200 knots without issue, despite being designed for 160 knots cruise speed. Bell intends the Invictus to cruise efficiently at 180 knots.

“We flew [the 525] until we said we’re done, but that rotor wasn’t done,” said Josh O’Neill, senior manager for technology and evaluation on the Bell 525 program. “So we went not just 201 knots. It was a good bit more than that.”

The 525 Relentless was the first aircraft Bell designed “totally in the 3D space,” O’Neill said, and the Invictus is similarly using a digital thread, enabling things like virtual reality maintaining exercises to provide design feedback without a physical product.

“You have a digital thread, the same part that’s used when you design your aircraft is used in the maintenance training, used throughout the product,” said O’Neill. “You design the aircraft in 3D, lay out all the systems and you’re able to go in there with an actual maintainer. So we pulled [a line maintainer] and had him put the gloves on and go maintain the aircraft. And you can see in the 3D space, I need to reach around this piece, I need to turn my hand in a way that the human hand doesn’t like to be turned. So we need to move that item.”

As a fly-by-wire aircraft designed with a modular open systems architecture (MOSA) approach, Bell believes Invictus will provide the Army with an path to autonomy — or enable a single person in the aircraft to focus on mission functionality — similar to Bell’s approach with the V-280 Valor, its offering for the Future Long-Range Assault Aircraft (FLRAA) competition. Bell officials said they are currently introducing autonomous flight software and performing software regression tests for that aircraft and intend to begin autonomous flight tests within the next few months.

In March 2020, when the Army narrows the FARA competition from five companies to two, Bell’s team will be nine months into design. After that, two of the five designs — selected from Sikorsky, Bell, Karem Aircraft, AVX/L3Harris [LHX], and Boeing [BA] — will be selected to participate in a fly-off slated for the second half of 2022. The Army hopes to field the first FARA aircraft in 2028.