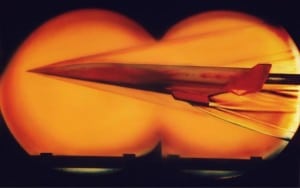 “We have accelerated our transition of capability based on hypersonic systems with the most recent budget cycle in FY ‘20 that we’re starting now,” White said. “We are still in the discovery and invention phase and the design phase in all of our systems right now. You learn through experimentation. The upcoming flight test is called ‘Flight Experiment Two.’ We’re still doing flight experiments prior to transitioning to weapon system prototype testing.”

Specific dates for the test of the Navy-developed hypersonic glide body remain classified, according to White, while adding the demonstration “later this year” will focus on the ability to “execute a mission consistent with future weapon application.”

Acting Navy Secretary Thomas Modly said in January the test for the glide body, which is being designed by the Navy and ultimately produced by the Army, will likely occur in the second quarter of FY ‘20 (Defense Daily, Jan. 31).

The Pentagon’s push to explore cruise missile options for hypersonic capabilities will build on the Defense Advanced Research Projects Agency and Air Force-led Hypersonic Air-breathing Weapon Concept (HAWC) program, according to White, as an option to find weapon configurations that could be more affordable and fit on a wider range of platforms.

“One of the big values that it brings to the table is the load out, and the ability to deliver weapons to the theater. Instead of having a small number of weapons on the bomber platforms, we can put large numbers on the bombers as well as the fourth and fifth-generation fighters,” White said.

Lewis told reporters that the hypersonic portfolio could include both boost gliders, which may offer greater range and trajectory advantages, alongside cruise missile configurations.

“At this point we really don’t want to see an ‘either/or.’ We actually want to see both technologies pursued because they both play well,” Lewis said.

“The Air Force made a very aggressive ‘lean forward’ decision a couple years ago to not only put one hypersonic program in place, transitioning from the S&T world to a weapon prototype, but to realize that involved risk and to put a second one in place in case those risks were realized,” White said. “Both systems had been matured and we’re in the process of taking those systems up to Critical Design Review-level of development. And the Air Force made a difficult budget decision for FY ‘21 that basically said the envisioned, desired system is associated with ARRW and we need to place our bet now and we’ll wrap up HCSW and put it on the shelf.”

An Air Force official told reporters in February that while the HCSW program had been progressing well and met all developmental milestones, the ARRW effort was building a more unique glide body design. Lockheed Martin [LMT], which had been leading both efforts, said at the time the company is “very disappointed” funding was cut for HCSW (Defense Daily, Feb. 10).