Defense Daily
© 2022 Access Intelligence, LLC - All Rights Reserved. Registration on or use of this site constitutes acceptance of our Terms of Service, Private Policy, and Cookie Policy.
An engineer with Huntington Ingalls Industries Newport News Shipbuilding Division grinds on advanced lower stage weapons elevator aboard the aircraft carrier USS Gerald R. Ford (CVN-78) while the carrier is underway in the Atlantic Ocean on April 1, 2020. (Photo: U.S. Navy)
Share:
By Rich Abott |
2 years ago |
04/23/2020
Also In This Issue:

This week the Navy said the fifth overall and first lower Advanced Weapons Elevator (AWE) on the USS Gerald R. Ford (CVN-78) aircraft carrier was certified while noting the next one is expected later this year.

“Certifying Lower Stage Weapons Elevator 5 [LSWE 5] is extraordinarily significant, in that we now have the capability to move ordnance from the aft magazine complex deep in the ship through the carrier to the flight deck with a speed and agility that has never been seen before on any warship in any fleet,” Rear Adm. James Downey, program executive officer for Aircraft Carriers, said in a statement Wednesday.

LSWE 5 was certified after the carrier returned to port following 32 days at sea while in a Post Delivery Test and Trials (PDT&T) phase. During the last at-sea period the ship finished flight deck certification and conducted more catapult launches and arrested landings. The Navy noted these activities raised the total number of aircraft launched off the carrier at over 2,300.

The Navy said now with the first LWSE the crew can elevate combat system and flight deck training to another level during PDT&T.

Program Executive Office (PEO) Aircraft Carriers said the crew will first operate LSWE 5 at sea when it’s next underway for sea testing in May. This will “ensure effective operations of the system in its operational environment, train additional crewmembers, and validate training and maintenance procedures.”

The long-delayed AWEs are designed to work faster at moving ordnance through the ship, enhance carrying capacity, and reduce manning, maintenance and total ownership costs.

PEO carriers also announced the next ordnance elevator, Lower Stage Weapons Elevator 1, is scheduled to be certified and turned over to the crew in the fourth quarter of fiscal year 2020. Whereas LWSE 5 moves ordnance in the aft part of the ship, LSWE 1 will move ordnance from the forward magazine to the flight deck.

Last week, the Navy’s top acquisition official James Geurts said the service is aiming to have the full 11 AWEs ready and certified for use before full shock trials are planned next summer (Defense Daily, April 17).

On Wednesday, the Navy specified the shock trials are scheduled for the third quarter of FY 2021.

The Navy said sailors from Ford’s weapons department will launch web-based instructor training on April 23 in preparation of turning over LSWE 5 to the crew.

This training uses the Carrier-Advanced Reconfigurable Training System (C-ARTS) and “brings high-velocity instruction to the Sailor’s point of need, teaching crew members the finer points of operating a more complex lower-stage elevator system that traverses more decks, has more doors, and features a host of additional control screen indicators, while in operation,” the Navy said. 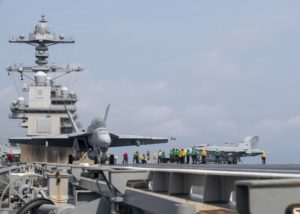 The Navy said AWE construction on the Ford has uniquely provided a test bed for overcoming incumbent developmental and production challenges associated with a first-of-class system.

“The ability to identify and to mitigate issues associated with each elevator’s unique operational tolerances has generated hands-on physical adjustments and software refinements, ensuring that future AWE operations are sustainable and reliable,” the Navy said.

Capt. Ron Rutan, PMS 378 program manager for Gerald R. Ford, said the AWEs are now operating as designed. The ship cycles each of the first four operational elevators about 20 times per day “to make sure every system stays in good working order and to document sustained performance,” he said.

The service said the next step in getting LSWE 5 operational will be CVN-78 sending 12 sailors to complete over 16 hours of web-based training in a nearby C-ARTS facility in the coming days.

The sailors will be guided by an instructor working remotely from shipbuilder and AWE builder Huntington Ingalls Industries’ Newport News Shipbuilding Division [HII].

The sailors will subsequently return to the ship for follow-up hands-on instruction in the elevator spaces.