The Army is expecting to detail updates to its 2019 modernization strategy in the coming weeks, to include technology focus areas in support of new weapons systems, as well as planning to publish its doctrine for future multi-domain operations in the summer of 2022, according to Army Futures Command officials.

“The key message is we haven’t strayed from our priorities, those six modernization priorities that we laid out in the 2019 [strategy],” Lt. Gen. Scott McKean, deputy command general of Futures Command, said Monday during a Defense News webinar. “We’re producing some of the things we said we’d produce and those things will be fielded in the coming years, so we have to continue to look if we’re going on the right path or if we’re looking into the right technologies. The Army modernization strategy is being updated.” 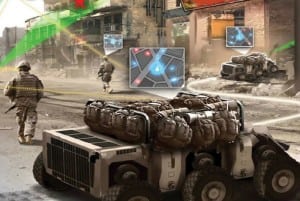 Lt. Gen. Thomas Todd, Futures Command’s deputy command general for acquisition and systems management, said the update will include details on eight key research areas for science and technology efforts “to support some future ideas that are emerging.”

“As we focus on robotics, autonomy, AI, all the things that we must make sure are part of the future Army, we have a relatively good idea that those are worth taking a big bet on,” Todd said.

Todd noted those technology areas could be applicable to the full range of programs across the Army’s six modernization priorities, to include the Next-Generation Combat Vehicle and Long-Range Precision Fires initiatives.

The Army’s 2019 Modernization Strategy laid out its program pathways required for the service to be Multi-Domain Operations (MDO)-capable by 2028 and MDO-ready by 2035 (Defense Daily, Oct. 17 2019).

The Multi-Domain Operations doctrine planned for release in summer of 2022 builds on the service’s work over the last few years to iterate on an MDO concept focused on driving strategic formations to better align with growing threats from Russia and China and growing coordination on key efforts across the services.

McKean reiterated the move to bring ‘concept to doctrine’ will continue even after the document is published, while initial steps will focus on investments in force structure design to continue posturing the Army for MDO requirements.

“What you’ll see in the immediate term is investment into force structure changes, whether we need to change an organization to better be able to employ the technologies that we’re developing. As we look at the doctrine and how we might fight differently, we can look at the command and control aspects and echelons of command, where things are led from,” McKean said.

Army To Start Enterprise IT “As A Service” Effort With Three Pilot Programs In FY19, Five More In 2020