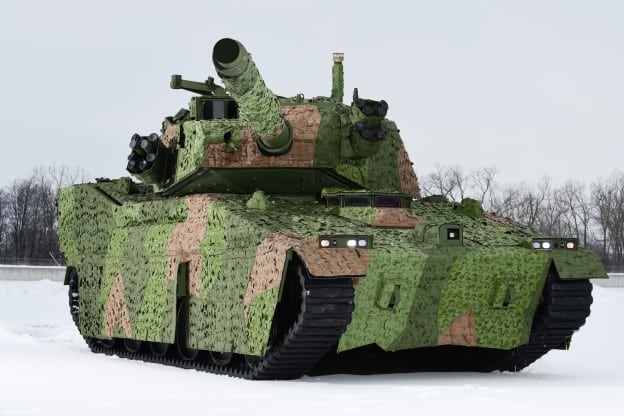 BAE Systems has submitted a proposal for the Army’s new Mobile Protected Firepower based on the M8 mobile gun system originally pitched in 1996 as a replacement for the M551 Sheridan light tank.

March 1 was the deadline to submit proposals for the engineering and manufacturing development (EMD) phase of the MPF program that seeks a relatively light, highly mobile armored vehicle with hefty firepower to accompany infantry brigade combat teams into hostile territory.

BAE’s newly built tracked vehicle sports a 105mm cannon, which is at the lower end of the Army’s published lethality requirements for MPF. It is currently going through internal testing until the vehicle is delivered to the Army on April 2 for additional government testing as a part of the bid assessment process.

“Our MPF vehicle is the result of more than 30 years of research and development to build a rapidly deployable, light combat vehicle designed specifically to support the light infantry,” said Jim Miller, director of Business Development at BAE Systems’ Combat Vehicles business. “Our offering integrates the most modern technologies into a non-developmental design based on development, testing, and lessons learned from our portfolio of combat vehicle programs.”

The M8 was developed by United Defense – since bought by BAE – in the early 1990s and offered to the Army in 1996 as a replacement for the M551 Sheridan light tank used by airborne forces. The program was canceled a year later and the mission ultimately was taken up by the M1128 Mobile Gun System, which is essentially a 105mm tank cannon mounted on a Stryker wheeled fighting vehicle.

BAE said it based its MPF on work the Army already did with the M8, but made improvements to it by adding modern technologies. A head-on photo of the prototype betrays few details about how the vehicle is equipped other than four racks of four smoke grenade launchers mounted to the turret, a gunner/commander sight on the turret to the right of the cannon and a central driver’s sight beneath the turret.

The M8 was designed to operate with a crew of three: commander, gunner and driver.

“Our solution is built around the IBCT’s needs and the evolving threats they face,” Miller said. “It is as deployable as the IBCT’s other equipment and is easily sustained and maintained with assets already organic to the IBCT. Our infantry fights in close terrain, urban areas, and remote locations, so a smaller, lightweight vehicle that still provides superior protection and lethality was essential to the design of our MPF offering.”

Science Applications International Corp. [SAIC] on Oct. 5 threw its hat in the ring as a contender for the MPF program. Its vehicle is based on ST Kinetics’ Next Generation Armored Fighting Vehicle (NGAFV) chassis and CMI’s Cockerill Series 3105 turret currently in production.

Two vehicles in early fiscal 2019 will progress into EMD and produce 12 pre-production vehicles apiece. All EMD testing, including pre-production testing and a soldier vehicle assessment, should be complete within 42 months of EMD contract award.

The Army expects to take delivery of industry prototypes within 14 months after the FY ’19 contract award, and will get them into the hands of an evaluation unit four months after delivery.

The contractor whose system best meets the evaluation criteria will be awarded the LRIP option(s). Only one EMD contractor will be selected for LRIP. The LRIP options include a total of 54 vehicles. LRIP also includes the retrofit of eight EMD vehicles. The Army plans to equip its first unit with MPF vehicles in 2025 and eventually purchase 504 units.