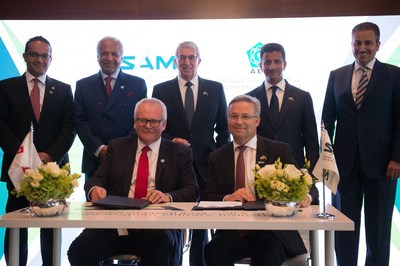 SAMI’s investment in AEC, the Riyadh-based private sector firm specializing in engineering, development, manufacturing, repair and technical support across defense, Information Communications Technology (ICT), energy, cybersecurity and high-tech fields, at the local, national, regional, and international levels, comes as part of SAMI’s ongoing efforts aimed at increasing local defense manufacturing in the Kingdom, in line with the directives of the Saudi Vision 2030.

H.E. Ahmed Al-Khateeb, Chairman of SAMI, said: “The foundation for the institution and growth of SAMI was laid three years ago with the announcement of the Saudi Vision 2030. SAMI’s journey began in 2017, and since then we have forged ahead with the backing of our country’s leadership, steadfast efforts of our team and support of our partners. Today’s agreement marks a significant milestone for us, as we advance our efforts to build a strong, dynamic and sustainable military industries sector in Saudi Arabia.”

H.E. Al-Khateeb added: “Defense electronics is a mission-critical element of the defense sector, and the acquisition of AEC firmly establishes SAMI’s presence on the global defense industry map. Furthering our aspirations in the sector, it will help us drive local content and stimulate economic growth.”

Established in 1988 under the Saudi Economic Offset Program, and under the ownership of a number of companies, including international defense, aerospace and security company BAE Systems, AEC has played a pioneering role in the fields of modern electronics, manufacturing, system integration, and repair and maintenance services for nearly three decades, thereby becoming a major regional player renowned for innovation. AEC specializes in the design, development, manufacturing, maintenance and repair of several advanced industry and military electronic systems, devices and equipment such as smart electricity and water meter systems, security protection systems for the vital infrastructure, industrial control systems, sight systems for the Typhoon aircraft, jammer and interference systems for the F-15 aircraft, electronic units for the F-16 aircraft, land equipment and training simulators for the Hawk 165 aircraft, and sight systems for the Tornado aircraft, among others.

AEC’s evolutionary growth has seen the company play a key role in localizing military manufacturing, deploying smart technologies, and accelerating industrial and commercial growth, while maintaining a Saudization rate of over 80% and 100% completion rate across more than 1,000 projects. AEC has developed its own framework, Aligned Integrated Methodology (AIM), which provides a standardized approach to governance and delivery, and comprises methodologies in Portfolio, Program and Project Management.

Following the acquisition, AEC will form the core of establishing SAMI’s original equipment manufacturer (OEM)-agnostic defense electronics and indigenous defense technology solutions business division, cutting across all of its business streams. In addition, SAMI’s total number of employees will significantly increase to reach 2,200, as a result of the acquisition.

In addition to facilitating Transfer of Technology (ToT), boosting local production, and deepening engineering, design, development, maintenance, repair, and overhaul (MRO) work, the acquisition will enable SAMI, through AEC, to develop its own mature products to help achieve its strategic goals set for the year 2030.

Since its inception in mid-2017, SAMI has been leading Saudi Arabia’s efforts in developing self-sufficient defense capabilities with its fast-growing portfolio of military products and services spanning four business divisions – Aeronautics, Land Systems, Weapons and Missiles, and Defense Electronics.

About Saudi Arabian Military Industries (SAMI):
Launched in May 2017, Saudi Arabian Military Industries (SAMI) is a state-owned ‎military industries company working under the directives outlined in the ‎Saudi Vision 2030. Aiming to be among the top 25 military industries companies in the ‎world by 2030, SAMI is expected to play a key role in localizing 50% of the Kingdom’s ‎total government military spending.