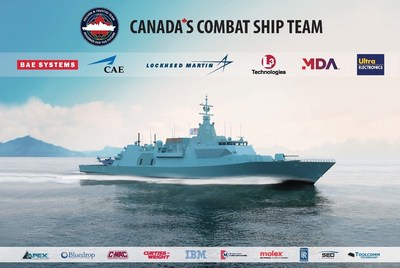 Bringing together a pan-Canadian team, the six companies have a uniquely skilled workforce and supply chain that are ready to begin work on the program today. Canada’s Combat Ship team employs a combined 9,000 Canadians in 40 facilities from coast to coast and engages a Canadian supply chain of more than 4,000 small and medium sized enterprises. The team also secured several additional partners, including Rolls-Royce with its Canadian-designed and manufactured Mission Bay Handling System that will enable adaptability for the ships’ operations.

The Type 26 Global Combat Ship is a globally deployable multi-role warship that meets the distinctive mission requirements of the Royal Canadian Navy. It is enhanced with the team’s collective Canadian naval expertise in combat system design, integration, training, logistics and program management.  Purposely designed for high-end anti-submarine warfare and capable of performing a variety of missions around the world, the Type 26 is acoustically quiet, versatile, highly survivable, and allows for significant growth margins for future modernization.

Canada’s Combat Ship Team will deliver lasting economic benefits to Canadian industry through $17 billion in value proposition commitments in innovation across Canada’s priority areas, including $2 billion in supplier development, $2 billion in research and development, and $200 million in advanced manufacturing.

All of this contributes to a strong Canadian team – Canada’s Home Team – ready to begin work on day one as promised.

“We are delighted to be part of Canada’s Combat Ship Team that has been awarded the Canadian Surface Combatant design contract.  We believe that the Type 26 Global Combat Ship is the right solution for Canada, combining Canada’s trusted Combat Management System with the world’s most advanced warship design and bringing together a pan-Canadian team with a proven track record and current capability to perform complex defence projects.”

“As one of Canada’s largest defence companies, we are proud to be part of this pan-Canadian team selected for the Canadian Surface Combatant program. We look forward to working closely with the Government of Canada, Irving Shipbuilding and the entire team to develop and deliver world-class capability that prepares the men and women of the Royal Canadian Navy for mission success.”

“This award is true validation of our Canadian capability. Our team is honoured, knowing that we offered the right solution for Canada and a proven ability to perform on complex defence programs. Lockheed Martin Canada is ready to continue serving as Canada’s trusted Combat System Integrator, as it has for more than three decades, leveraging the innovation and talent here at home that will ultimately result in unprecedented economic outcome for Canada.”

“With over 2,200 Canadians working at L3 Technologies, we stand ready to deliver the latest EO/IR sensors, Integrated Platform Management, Integrated Communications and Torpedo Handling systems for the Canadian Surface Combatant.  With proven capability on existing Canadian ships, L3 Technologies is proud to be on the team that will deliver the world leading performance expected by the Royal Canadian Navy.”

“As one of Canada’s leading space and defence companies, MDA’s participation in this project validates our expertise in electronics, antennas, signal processing, system engineering and mission software capabilities. In addition to providing world-class operational CSC capability to the Canadian Armed Forces, this project will be a catalyst for exporting more of our technology to the global naval market.”

“As the underwater warfare lead on the CSC Home Team we are bringing to bear our considerable depth of anti-submarine warfare experience and capability, ensuring Canada’s new ships will provide an enduring operational advantage to the Royal Canadian Navy. This work will generate high-tech jobs in Nova Scotia for sonar design and manufacturing and add to our existing significant export capability.”

“Our experience and world-leading capability as providers of integrated power and propulsion solutions will deliver these warships with exceptional power through-life and the superb acoustic performance essential to anti-submarine warfare operations.  Our Canadian-designed and manufactured Mission Bay Handling System will allow the essential flexibility and adaptability for future operations.”

About BAE Systems
BAE Systems is a world leading shipbuilding, support and maintenance company with the skills and expertise to design, build, integrate, test, commission and support complex warships. BAE Systems has a strong track record of collaboration with customers and industrial partners worldwide to share technology and skills – helping countries grow their naval and industrial capabilities. Canadian industry is already integral to the Type 26 Global Combat Ship program. BAE Systems has operated in Canada for over 100 years partnering over a recent period with over 240 Canadian companies. BAE is active across Canada with equipment including Hawk trainer jets, Submarines, cyber security, Hybrid drive busses, and naval guns.

About CAE
As a globally-recognized training systems integrator, CAE is committed to providing defence and security forces world-class training centres, training services, and a comprehensive portfolio of training solutions. CAE is headquartered in Canada and has employees in 15 locations across the country.

About Lockheed Martin Canada
Lockheed Martin Canada has been Canada’s trusted defence partner for nearly 80 years and has a proud legacy of providing innovative naval systems and sustainment solutions for Canada and abroad. For more than three decades, Lockheed Martin Canada has demonstrated its capability and commitment to the Royal Canadian Navy as the Prime Contractor and Combat System Integrator for the HALIFAX Class Frigates. The company employs approximately 1,000 employees at major facilities in Ottawa, Montreal, Halifax, Calgary, and Victoria, working on a wide range of major programs spanning the aerospace, defence and commercial sectors.

About L3 Technologies
A leading provider of communication, electronic and sensor systems used on military, homeland security and commercial platforms, L3 Technologies is also a prime contractor in aerospace systems, security and detection systems, and pilot training. With over 50 years of business operations in Canada, L3 has a strong Canadian presence with L3 MAPPS, L3 MAS, L3 Communication Systems Canada and L3 WESCAM that each have experience working on technologies and projects for the Royal Canadian Navy.

About MDA
MDA is an internationally recognized leader in space robotics, space sensors, satellite payloads, antennas and subsystems, surveillance and intelligence systems, defence and maritime systems, and geospatial radar imagery. MDA’s extensive space expertise and heritage translates into mission-critical defence and commercial applications that include multi-platform command, control and surveillance systems, aeronautical information systems, land administration systems and terrestrial robotics. MDA is also a leading supplier of actionable mission-critical information and insights derived from multiple data sources. Founded in 1969, MDA is recognized as one of Canada’s most successful technology ventures with locations in Richmond, Ottawa, Brampton, Montreal, Halifax and the United Kingdom. MDA has supported the Royal Canadian Navy for over two decades.

About Rolls-Royce
Rolls-Royce pioneers cutting edge technology to provide highly-efficient integrated power and propulsion solutions. Rolls-Royce has been established in Canada for over 70 years and today employs over 1500 Canadians at eight locations across six provinces. Rolls-Royce plays an active role in many of the world’s major defence programs offering advanced system solutions to navies and coastguards.