NANJING, China, Nov. 2, 2018 /PRNewswire/ — AHA Entertainment, in cooperation with Spacety, one of the first commercial aerospace companies in China, held a successful press conference at the 2018 Tencent Global Partner Conference OPEN DAY on November 1, 2018 in Nanjing. The two companies announced a strategic partnership, whereby SEVEN, the popular character of AHA Entertainment’s franchised animation TV series Killer Seven, would be painted on the surface of a commercial satellite and launched into outer space. This means SEVEN will be the very first cartoon character that physically flies into outer space. 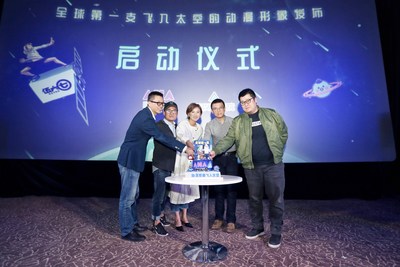 Killer Seven, follows the adventures of SEVEN, a green-hand assassin who comically botches his missions and resolves conflicts with his personal charisma. The first season of the animation, released in April 2018, has been viewed online more than 230 million times, rated 8.9/10 on Douban.com and 9.9/10 on Bilibili.com. The partnership is the first collaboration worldwide between the animation and the aerospace industries, arousing widespread attentions in both industries. Therefore, the inter-industry collaboration was highlighted at the OPEN DAY.

“The cartoon character of Killer Seven is popular and influential among young audiences. Through the partnership with Spacety, AHA Entertainment is willing to inject dynamism and attract young people’s attentions into the aerospace industry,” said CEO of AHA Entertainment and Producer of Killer Seven, Ms. Aiken Zou Shasha when commenting on their inter-industry collaboration with Spacety. As the leading commercial aerospace company in China, Spacety has successfully launched 4 satellites, all independently developed by itself, along with the Long March — 2C Carrier Rocket at Jiuquan Satellite Launch Center. “We expect more young people to focus on the aerospace industry, which seems remote to them,” stated Mr. Yang Feng, CEO of Spacety, who expressed his expectations in a video recorded at the Launch Center. “With support from SEVEN, such a high-quality animation IP, we enable more young people to understand and boost their interest in the commercial aerospace industry of China,” said Mr. Ju Zaiqiang, Director of Scientific Projects of Spacety, who attended the press conference.

Spacety’s commercial satellite painted with AHA Entertainment’s SEVEN will be launched into space in December 2018. On that occasion, SEVEN will become the very first cartoon character to join the astronauts who have made the exciting journey.

Global Satellites to be Built & Launched by 2027