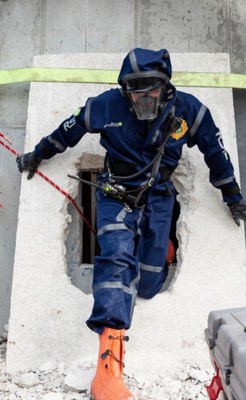 The second exercise was at the Homestead-Miami Speedway which was coordinated by L2 Defense, Inc.

This scenario simulated a terror attack involving Weapons of Mass Destruction that caused a section of the racetrack to collapse injuring and contaminating spectators during an event. U.S. Army North supported MDFR under their Incident Command structure to manage resources during this response. MDFR deployed RST’s PPE’s including Full Body Suits, Torso Vests and IED/RDD Shields. According to first responders RST’s suits made a significant difference when working the rescue scenarios, describing the suits as, self-cooling, lightweight while allowing them to perform in a hot environment for extended time period.

“This exercise served not only to test our capabilities during a radiation event, it also provided key information on what equipment worked the best during long and extended hours of operation in a not so friendly environment as we may encounter during a radiation release. One of the key points to any successful HazMat operation is the protective garment utilized for the response. For this exercise we chose RST’s ICE suit and Demron Full Body Suit suit because of its durability, weight and protection capabilities. Add to that other components like the radiation vest and the high energy nuclear shield and we are fully mission capable,” said Lt. Alvaro Tonanez, Exercise Planner/Training Officer, Hazardous Materials Bureau with the Miami Dade Fire Rescue Department.

Click the link provided to watch the video: https://www.youtube.com/watch?v=qx84pLJTeWk