A welder authenticates the keel of LCS 25, the future USS Marinette, by welding the initials of ship sponsor Jennifer Granholm.

MARINETTE, Wis., March 27, 2019 /PRNewswire/ — In a ceremony that formally marks the beginning of a ship’s construction, Lockheed Martin [NYSE: LMT] and Fincantieri Marinette Marine laid the keel on Littoral Combat Ship (LCS) 25, the future USS Marinette. During the ceremony, the ship’s sponsor Jennifer Granholm, former governor of Michigan, had her initials welded into the ship’s keel plate. 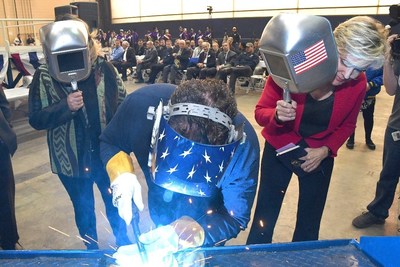 Unique among combat ships, LCS is designed to serve a variety of missions today, and is easily adapted to serve future and evolving missions tomorrow.

“LCS brings something really special to the Navy. There is no other class of ship that delivers this level of flexibility for future missions,” said Joe DePietro, vice president and general manager of Small Combatants and Ship Systems. “LCS is minimally manned, so the U.S. Navy can efficiently project presence around the world. It really is a remarkable ship, and our team is so proud to begin construction on the future USS Marinette for the Navy.”

“We are thrilled to build the future USS Marinette. As shipbuilders, we transform flat panels of steel into warships, and feel so much pride in the craftsmanship required to do this important work. It is an honor to be able to do that for the ship named after our hometown,” said Jan Allman, president and CEO of Fincantieri Marinette Marine. “The Navy selected an incredible woman to sponsor our ship. Governor Jennifer Granholm represents a large number of our workforce coming from Michigan, and she has been an avid supporter of the LCS program since its inception.”

LCS 25 will be the 13th Freedom-variant LCS, and will join a class of more than 30 ships. She is one of seven ships in various stages of construction and test at the Fincantieri Marinette Marine shipyard.

You can find the following multimedia resources of the keel laying ceremony at the below links: